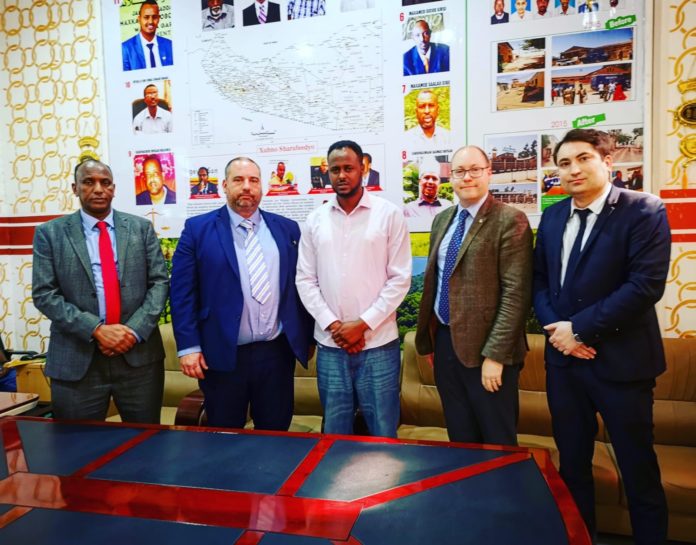 Paul Brothwood and Bill Etheridge MEP travelled to Somaliland to meet with representatives to check on the condition of Mr Abees and help find a solution for him.

British Citizen, Abdirahman Abees was in prison in Somaliland due to a poet he recited (For reference click here).

Mr Etheridge met with Mr Abees at the regional court in Hargeisa, on 24/2/2019. During this meeting Mr Paul Brothwood presented a letter to the Chairman of the regional court, Ahmed Dalmar, with the aim of fostering a speedy solution and the possibility of his release.

At the meeting Mr Etheridge asked Mr Abees about his conditions, treatment and access to his legal team as well as his safety. Mr Abees stated he was treated well and he sees the trial as fair and there is no pressure on him from the Court. Mr Etheridge MEP was accompanied by the President of the European Council on Democracy and Human Rights, Janusz Niedzwiecki.

West Midlands MEP, Bill Etheridge said “I was pleased to see Mr Abees in a good condition. He was very open and made it clear he had been given access to his legal team and was safe”

“Somaliland is moving forward on its path towards to recognition and we don’t want any incidents setting it back. I was pleased to see the focus on Human Rights in the country and how Mr Abees has been treated”

Paul Brothwood stated, “As someone experienced with dealing with the recognition of Somaliland I wanted to use all I could to help find a solution for this case. Thankfully a decision was reached on Monday.”

“I am pleased to confirm he has been found innocent and is being released from prison.”

“This is a situation we will be watching closely to ensure the Goverment follows up on their promisies.”