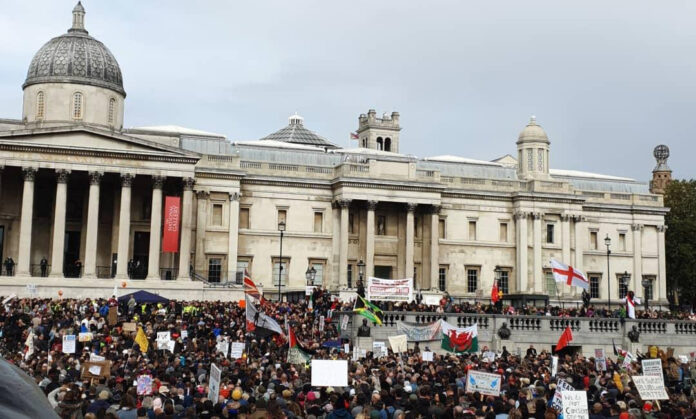 As the new measures were announced on the 22nd of September (which included a 10pm curfew for pubs and compulsory mask wearing when not at your table at a pub or restaurant), a Sky News article shortly followed. In it, it announced that these new measures were the final nail in the coffin for London’s Hospitality sector, a sector that I work in. Many people have a skewed view of what jobs broadly make up the hospitality sector. People often associate it with fine dining at the Ritz, but truth be told, it is a massive sector of the British economy. It includes Restaurants, pubs and bars, travel and tourism, hotels and lodging and any business that provide recreational services. In a service based economy like the UK, which doesn’t produce or grow much of anything these days, this is an indispensable part of our economic life. So, going into the anti-lockdown protest on Saturday the 26th of September, as well as having the interest of my compatriots in mind, I was additionally spurred on by the realisation that my own livelihood was on the line. Especially since I work in a central London pub (largely dependent on City workers coming for after work drinks and students) and a hospitality agency that services everything from ‘posh’ hotels to events.

I came slightly late to the protest, waiting for a friend outside of the McDonald’s opposite what was the Lord Moon of the Mall (not in operation for many months now and its staff have been moved elsewhere). We eventually made our way to Nelsons Column in order to get a birds eye view of the event. Making our way there, I saw many Union and England flags waving in the distance. I thought “ah, its going to be the usual crowd”. I’ve been to many a protest beforehand and whilst I certainly have no qualms with our national flags, it did give me the immediate impression of what sort of protest this would be. But then, coming up to Nelsons column I saw an anarchist flag. Odd for England and anarchist flags to be in the same protest together, as opposed to the two coming to blows with each other. Then as we scaled Nelsons column and got a better view of the crowd in front of us I immediately realised this was a very different protest altogether.

There was an assortment of different banners, ranging from the aforementioned Union and England flags to Libertarian, Jamaican, Welsh, Scottish flags as well. On Nelsons column itself there was a Jamaican drum band playing, who truth be told were better and more uplifting than the actual music the organisers put together on the stage. The protest itself was very calm and cordial, with deafening cries of “Freedom, Freedom!”. The speakers giving good talks on the damage lockdown and restrictions are doing to young people’s future, the fact that COVID-19 is killing less people than suicide and overall the disproportionality of the measures imposed relative to the actual danger COVID-19 posed. Behind me was a gentleman who amusingly chanted “we’re all going to jail, we’re all going to jail!” with the overwhelming smoke of cannabis in the air. Though I had no doubt in my mind if we were going to get ‘nicked’ that day, it would be for the protest itself and not for illicit drug taking by a few in the crowd (considering how unserious the police takes the latter).

The friend I was with felt unwell so I walked her to the tube and decided to explore the protest a bit more. Walking to the back of the stage area in front of the National Gallery, I saw a whole host of other different groups present. Ranging from Trump supporters in their MAGA hats, to Christians, Poles and even a multi-ethnic group of Rastafarians carrying around a portrait of Hailee Selassie. I even saw a member of the green party there. Evidently lockdown has enraged a diverse range of people. So much so that all these various groups, of all different backgrounds and persuasions, were all united peacefully with one goal in mind. End the COVID-19 madness, end lockdown and let everyone get on with their lives, before too much damage had been done. All was well, until ‘The Old Bill’ turned up in force. These were not the same police officers who impotently ‘follied’ in the face of the previous BLM or XR protests that graced Whitehall previously. No, they knew full well that this protest would not garner the same sympathy in the media if they acted heavy handily and it was immaterial to them that the protest was peaceful.

As the TSG (Territorial Support Group, more or less our riot and public order police) moved in to clear the stage, an older women protested and shouted “we’re protesting peacefully”. She was completely brushed to the side and the stage was occupied by the police. The crowd was mostly dispersed now, with only a smaller, albeit significant and stubborn contingent making their way to Hyde Park to carry on the protest there. I (which I somewhat regret now) decided that was the day done and made my way back home. The police response isn’t what shocked me the most that day, they acted in a similar fashion before and it was to be expected. What shocked me was seeing the comments on social media when the ‘Mainstream Media (MSM)’ reported on it. “use water canons on the selfish c**ts”, “Don’t treat them in the NHS” and “The police were too soft on them” were things I saw commented on the news stories. One that repeatedly struck me was the repeated calls for sending in the Armed Forced to deal with a peaceful protest.

I cannot overstate how worrying the last one is. At best, there is the expectation that the army would be even more brutish towards the protesters than the police would be. This view is not unjustified, as I have personally seen in Colchester where I go University (Colchester also being a garrison town) small teams Military Police effortlessly dealing with drunkards and ill disciplined squaddies on a night out. However, at worst I would not be surprised if the people calling for the Armed Forced to be sent in would also like to see the them use lethal force. On its own citizens. During a peaceful protest. And this demonstrates that we are not only fighting against a government that does not understand the limits of its own power and defecates on the spirit of our ancient constitution, but that we are also dealing with a citizenry that now relishes in the naked authoritarianism seen in tyrannical despots, all because of the fear of a virus that is recent months killing less people than the seasonal flu. We are not only facing economic ruin, millions of people dying from long term physical health problems (such as cancer) because they couldn’t get NHS treatment or diagnostics in time, a mental health crisis due to people being locked up for months on end but also a radical and undesirable change in our society.

In previous times of crisis, the state and society recognised that for time of the crisis civil liberties and freedoms would have to be relinquished to deal with the crisis at hand but after the state would relinquish its powers and society would go back its peacetime equilibrium. The two Great Wars being the key examples here. Governments over the past couple decades have not acted in this manner however. If we look back to the anti-terror legislation of Tony Blair’s administration, we can see the state’s refusal to relinquish its powers with these powers are still in place and even expanded upon under the later Tory governments of Cameron and May. Now we see the very real possibility of the Boris Johnson government renewing the Coronavirus Act 2020 in the coming weeks and having British society endure this farce for at least another 6 months, quite possibly even longer than that. I say this as someone who in honesty is quite authoritarian in my political outlook, having long since repented my sins of libertarianism long ago. But power has limits, something our current government and a large section of the British public do not understand. So going forward it is clear we’re going to need more demonstrations, we’re going to have to be persistent and disciplined, because a lot hangs on the line if we fail.