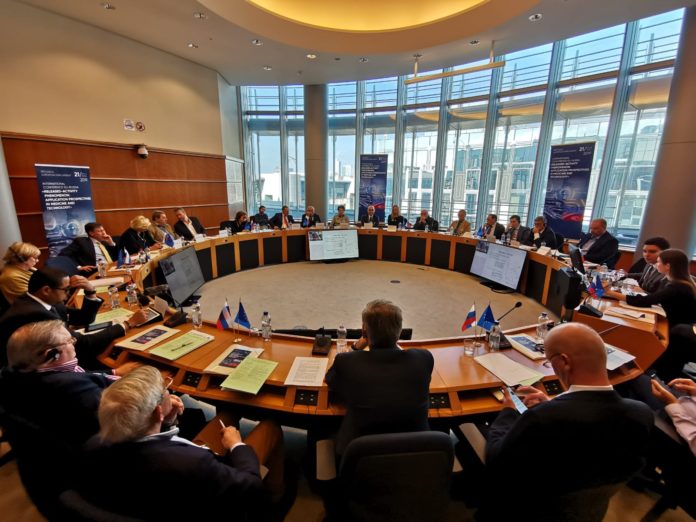 On the 21 February, in European Parliament an international
conference was held. “Released-activity phenomenon: application
prospectives in medicine and technology”. An international group of
scientists from France, UK, USA, Norway and Russia in parallel with each
other for more than 20 years developed the idea of Professor Oleg
Epstein from Russia and concluded common results that helped confirm phenomenon.
The scientists met the members of the European Parliament and
discussed the legislative future of Released-activity phenomenon and
application prospectives in medicine and technology.

Professor Oleg Epstein, who opened the conference said that
released-active drugs, and especially released-active antibodies, open
up new opportunities in medicine. Modifying effect of them on the
original substance can be used in technology to develop new materials,
especially in nanotechnology.

Several members of the European Parliament representing different
countries (UK, France, Germany, Romania), members of the Belgian
Parliament attended round table dedicated to the phenomenon of release
activity and acknowledged the importance of this research.

Conference host, member of European Parliament Bill Etheridge said:
“This is an example of successful cooperation between Russia and the EU
in the period of complicated relations between our countries. In the era
of information society, when communication links actually erase state
borders this is an excellent example of how scientific activity can
become a unifying motive, a point of contact and interaction in the
establishment of political cooperation between the countries of Europe
and the Russian Federation. We, as politicians, should encourage and
develop such contacts between scientists of our countries to solve the
global issues of humanity in the field of public health maintenance”.

Member of the European Parliament from France Dominique Bilde underlined
that it is very important to support cooperation between Russia and EU
in the scientific area. She stressed out the importance of the fight
against diabetes which is one of the most dangerous and widespread
diseases which constitutes a big problem, namely in France.

Sebastian Johnston, professor of Respiratory Medicine & Allergy at the
National Heart and Lung Institute, Imperial College London said that
products containing released-active antibodies to immune proteins may
possess antiviral/anti-inflammatory effects which may make them
attractive for treatment of illnesses induced by rhinoviruses, such as
asthma exacerbations.

The world-famous French Professor Jean-Claude Chermann, who discovered
the human immunodeficiency virus, confirms the findings of his British
colleague: “released-active antibodies can potentially be used as a part
of combined therapy of viral infections including those caused by viral
strains resistant to standard medicines.”

Member of EP David Coburn said from Scotland said: “Innovations often
face difficulties that are associated not only with the novelty of study
approach, but also with its implementation, and often – with untimely
acceptance by the scientific community, because breakthrough
technologies usually transform the existing paradigm of scientific
knowledge. The history of science is full of examples when novel
achievements have been ignored for decades before their acknowledgement,
let alone implementation. Now we face a lot of medical challenges that
require urgent solutions, since they affect human life and health. We
should fully support all the promising breakthroughs, with adequate
attention payed to the quality of the related work, without doubt. There
is solid scientific evidence of the relevance of research work carried
out in the area of ultra-high dilutions of substances, despite the fact
that understanding of the underlying processes is still difficult. We as
politicians should support these extraordinary investigations. The main
thing I see here is that Russians and west work together and that’s great.”
Senator Jean-Claude Mokeni said that he had always supported Russia,
that’s why I’m glad that Russian scientists participate in the evolution
of science.

Member of EP France Jamet said: “It was a very interesting conference.
Diabetes is a disease that is well-known for a long time and I’m happy
that nowadays there are new ways to deal with it using released-active
drugs. Also politicians should make their contribution in the
development of scientific cooperation. And today I can say for sure that
cooperation between Russia and European Union exists and it is continued.”

Dr. Mikhail Putilovsky told about results of clinical investigations
sponsored by Materia Medica Holding. During the last 20 years in
collaboration with the leading International Research institutes Materia
Medica has created biotechnological platform based on the technologicaly
processed antibodies. It has already resulted in a number of innovative
drugs for treatment of various diseases including infections, diabetes,
urological and neurological disorders.

Member of the European Parliament Nathan Gill said: “Usually it is
difficult for politicians of the European Parliament to attend this kind
of scientific events because of lack of time, and especially during 3
hours. But I enjoyed this conference and I am really excited by what I
have seen and what I have heard. Particularly, because I’m diabetic
myself.” He emphasized that “cooperation in the areas of science and
medicine is a good example for us, politicians, because scientists and
medical specialists work for people.” Mr Gill pointed out that disease
knows no borders, and in this regard medical work is especially
important because medical scientists do what patients really need.

As a result of the conference EP deputies signed a communiqué stating
that – today humankind faces global problems in public health protection
and the conference participants believe that the presented scientific
data on the released-activity phenomenon are convincing. The field
itself is relevant and certainly should be developed further as a
promising and potentially breakthrough technology.