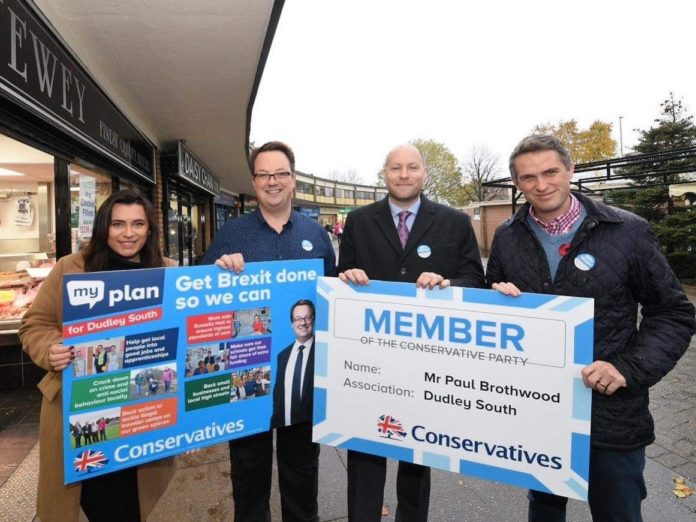 The Brexit Party candidate Paul Brothwood, for Dudley South has quit the Party and endorsed the candidacy of Conservative MP Mike Wood.

The former Group Leader on Dudley Council and Wordsley councillor had been selected to contest the seat for Nigel Farage’s party in August but has now resigned as a candidate, citing fears that votes for the Brexit Party could help to elect a Labour-Liberal Democrat government that would reverse the result of the 2016 referendum.

Dudley South has swung between Labour and Conservative MPs, but has been won by Mike Wood in the last two General Elections.

“This has been a huge decision for me personally. I have talked at length with Mike about his vision for our area and I know it’s safe in his hands plus he is committed to delivering Brexit.

“I would not want to be responsible for letting the racist Labour Party in, which would cause havoc to our public services, to our economy and to community cohesion. As a type1 diabetic I know the NHS is safe in Conservative hands.

“It feels good to be back in the Conservative family who are committed to delivering Brexit and I am confident that Boris Johnson is the best person to stand up for Britain.”

“I’m really pleased that Paul has decided to back our campaign.

“Having worked with him on the Vote Leave campaign, and served alongside him as a Dudley councillor, I know how much Paul cares about our local economy, our public services and improving the opportunities available for people in our community.

“He shares my vision for our area and our country, and I am delighted that he will now be supporting our work to deliver on it.”

“It is great to have such an experienced councillor and campaigner as Paul backing the Conservatives and he will play a major role in the party.

“Paul Brothwood has spent many years campaigning to get Britain out of the EU and has recognised the only way to deliver that is by voting Conservative at this election so we can get Brexit done.”

Farage to meet Barnier in Brussels