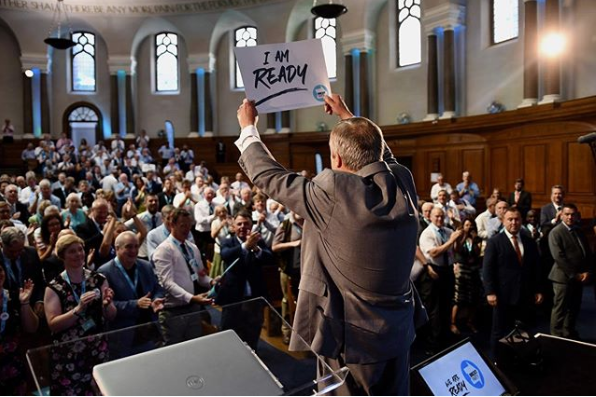 Nigel Farage has vowed to put the country first and work with the Conservatives if Boris Johnson was to deliver a no deal Brexit.

Speaking at a rally yesterday in Westminster leader of the Brexit Party, Mr Farage warned Mr Johnson that his party could either be ‘his best friend or worst enemy.’

‘Boris is going off the rails…I’m pleased that he is saying we will leave on the 31st October do or die, the trouble is we’ve heard it all before…Not only will it cost us 39 billion but it will lead us into a transitional period that has the option of being extended, which will go on until 2022.’

Farage also added that the current proposed deal is ‘unacceptable’ for the British steel and fishing industries. If Johnson were to go ahead with the no deal scenario and a general election be called, Mr Farage added he would be willing to work with the Tories.

‘We will do the right thing and put country before party and we’d do it every time.

‘The only way they could win a workable majority is with our help or support, we will not get a genuine Brexit without the Brexit party and we are ready to play our part in the destiny of this country.’

It has only been 19 weeks since the Brexit Party was officially launched and in that time 3,000 applications to become approved parliamentary candidates were received, of which 1,400 interviews took place. This has resulted in 635 people from up and down the UK ready to stand for the party should a general election be called.

Chairman of the party, Richard Tice opened up the proceedings to an energetic and enthusiastic crowd. In a confident and charismatic manner he addressed the room before Mr Farage stepped on to the stage:

‘We are ready…more ready than any other political party…the establishment are petrified of us…we must not let him (Johnson) sell this country down the river by reheating, rehashing and repackaging the worst deal in history.’

In recent weeks the Conservative party have been accused of duplicating the Brexit Party’s main policies which include scrapping HS2, substantial investments for regions, super broadband and digital infrastructure and an online sales tax to protect high street businesses.

With news emerging this afternoon that the Queen has approved a request by Boris Johnson to prorogue (suspend) parliament between the second week of September and the 14th October, it appears that we are heading towards the no deal decision. Leaders of the other political parties that are remain focussed have expressed their dismay with today’s latest revelation. This would in turn arguably leave them with inadequate time to try and block BoJo’s brexit. Mr Johnson on the other hand will be extremely pleased with today’s decision made at Balmoral.

‘We’re not going to wait until October 31st before getting on with our plans to take this country forward…We need new legislation, we’ve got to be bringing forward new and important bills and that’s why we are going to have a queens speech and we are going to have it on October 14th.’

‘The more he (Johnson) ups the no deal rhetoric the more seriously he feels he will be taken and the more chance he has got…I just don’t believe it…I am concerned about it.’