The price of a train ticket in Britain will go up by an average of 3.4% from the start of January – the largest increase since 2013.

Mrs Seymour, a West Midlands MEP, said: “This is once again penalising those people who rely entirely on public transport to travel to their workplace.

“We are told that 97% of the money is reinvested in the railways, yet the stories we hear from commuters about tatty, overcrowded rolling stock suggest otherwise.

“The Government is constantly talking about encouraging people to ditch their cars and switch to public transport, yet the price of a rail ticket is already prohibitive for many, even before these latest rises.”

The Rail Delivery Group has admitted that it is a ‘significant increase in fares’.

Mrs Seymour said: “The very least we expect to see is a similarly significant increase in the quality of our railway network.

“If it’s not forthcoming, then I can only assume that the rail operators are indeed laughing all the way to the bank, as the Rail, Maritime and Transport Union has suggested.

“More than 10% of trains arrived late at their destination over the past year – you cannot continue to hike prices, without addressing shoddy customer service.”

Paul Plummer, Rail Delivery Group chief executive, told the BBC’s Today programme: “We are very aware of the pressures on people and the state of the economy and are making sure everything we do is looking to improve and change and make the best use of that money.”

Mr Plummer admitted it was “a significant increase” in fares – the highest since they rose by 3.9% in January 2013. 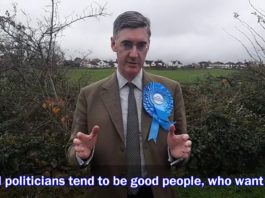 We found Jacob Rees-Mogg, and it wasn’t hard