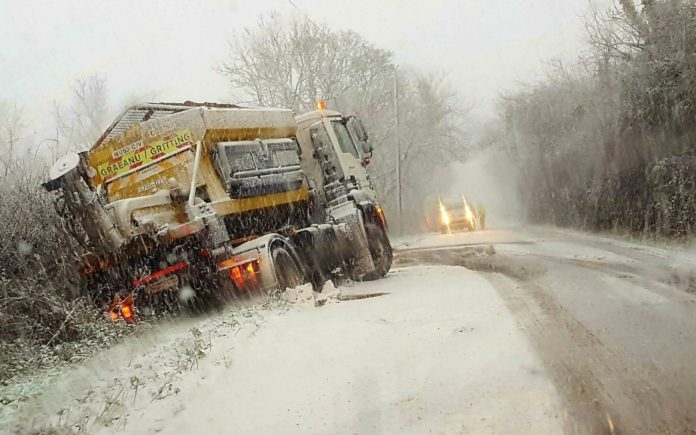 Storm Caroline sweeps across UK and causes havoc in it’s path with many parts of the UK reporting heavy snow. The met office issued a severe weather warning, stating:

“Snow showers will continue to affect parts of Scotland, Northern Ireland, Wales, northern England and parts of the Midlands. 2-5 cm of snow is likely in places over the warning area. 10-20 cm is possible for some locations, mainly in northern Scotland, Northern Ireland, north Wales and perhaps the northwest Midlands. Icy surfaces are also likely to be an additional hazard, especially overnight. The heaviest and most frequent snow showers will progressively become confined to northeast Scotland during Saturday. Impacts include possible travel delays on roads stranding some vehicles and passengers with possible delays and cancellations to rail and air travel. Some rural communities could be cut off and power supplies interrupted. Probably some icy stretches on some untreated roads, pavements and cycle paths and also a chance of injuries from slips and falls on icy and snowy surfaces.”

Here is a snapshot of the weekend weather – and if you like snow, then you may be in for a treat…… 😄 pic.twitter.com/6nUFuO7WEz

Social Media users took to tweeting videos and images of how badly affected their areas were.

It is snowing in Chester🌨 pic.twitter.com/FTIbv8oMdo

Highways England advised road users intending to travel through the West Midlands and the North West of England to check the forecast and road conditions before they travel, with the threat of disruption throughout the weekend.

Councils are attempting to grit the roads – We know how good they are at, don’t we?

Move Over! The Reytons Have Arrived!