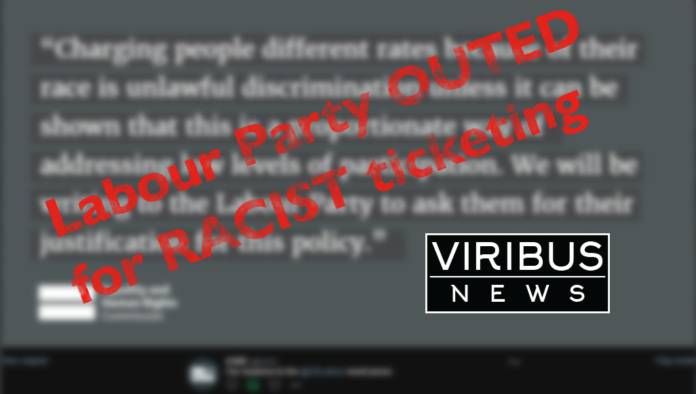 The Equality and Human Rights Commission (EHRC) has said that Labours “charging people different rates” due to skin colour is “unlawful discrimination”.

In a Tweet sent this evening, the EHRC said it will be writing to the Labour party to seek justification.

This comes after yesterday Ben Bradley MP accused the Labour Party of having three ticket prices for a East Midlands Conference.

Bradley tweeted “What the actual F*&$! This can’t be real? @jeremycorbyn is this real!?

Ben Bradley, who is one of 4 MPs aged less than 20, was accused of propagating “fake news”.

However, he was able to produce screenshots showing that the labevents.org website has the 3 very different ticket prices.

For those disputing this as #FakeNews -here it is right from Labour’s website.
White people pay £40 to get in, everyone else pays £30 to get in!

I’m all for taking the flack for stupid things I said when I was young, but this is not talk, this is action and it’s happening now! pic.twitter.com/ch0X0YFZRj

We found Jacob Rees-Mogg, and it wasn’t hard

Helen Healy - January 24, 2020 0
Measures have been put in place at Heathrow airport and at university campuses across the UK including Chester University to help prevent the spread...